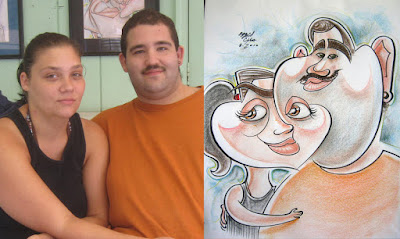 1. I was pretty happy with how this came out and came together--his cheek flowing into her nose. a sweet couple too. 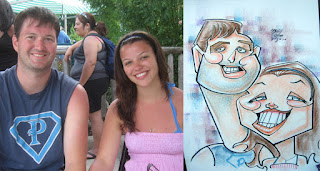 2. I liked how the girl came out and the cheek line on the guy 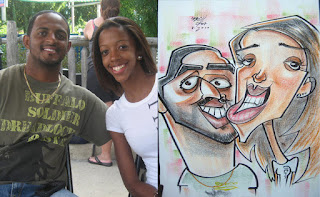 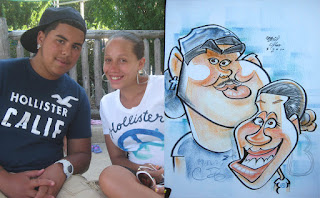 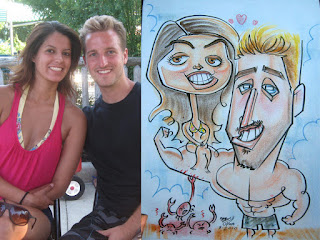 5. made the guy's nose too long, need more chin on girl 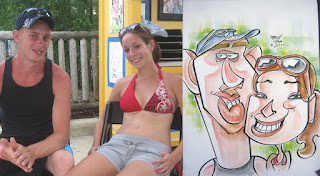 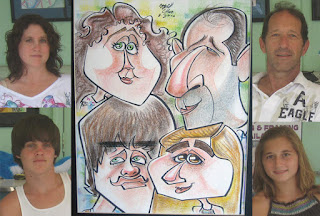 8.so this kid and his family comes up to me at the stand and says he works for Kaman's at Cedar point in Ohio. For those that don't know, I work for Kaman's art shoppes as well and we do a lot of the art stuff, like, caricatures, airbrush t-shirt, face painting etc. in a lot of the theme parks across the US. He asks me if he gets a discount, I wasn't quite sure, he said ok, and that he'd come back. a few minutes later, I get a call from my manager and he said he just got a call from the Kaman's Cedar point manager that she got a text from her employee (this kid) asking if he gets a discount. She asked us if we could hook him up and I was like sure, no prob. I would have anyway, usually, if you're a fellow Kaman's employee we hook them up, but usually it's just 1 person and we just draw them. they wanted their whole family drawn and only the kid worked for Kaman's so I wasn't sure. so anyway, they came back and I said I got the relay and would hook them up, I said I'd give them like 40% off. the mom then asks if she could get an EXTRA 15% discount since she had a season pass on top of what I was giving. I was like, wow. seriously?! I was already giving them a ridiculous discount and considering I still get paid by commission, I'd be taking the hit and it was 4 people to draw so I'd be using my time when I could be making more money. I was pretty shocked and was like, fine. whatever. and still gave it to her. I really should have hacked it out and gave them a crappy sketch, but I know people at Cedar point so if he showed them the crappy sketch it'd be kinda embarrassing, so I did a decent one. I didn't go too crazy but was going for solid. really though, besides the mom wanting more discount, they all were really nice and pleasant folk. also, what I didn't understand, was why get a caricature done at a park 10 hours away? why not just get it a their home park? I don't know... 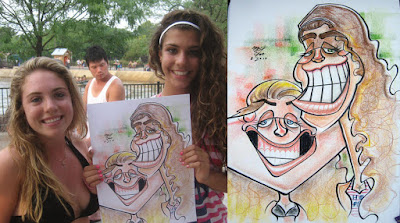 9. these were cool girls that dug the sketch. 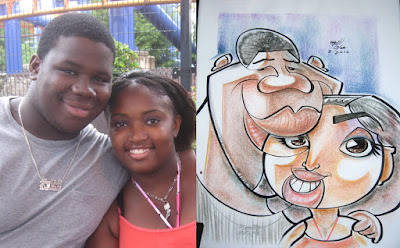 10. ha, I don't know how it happened, but it just turned out that it looks like he's sucking on her eye, heh. 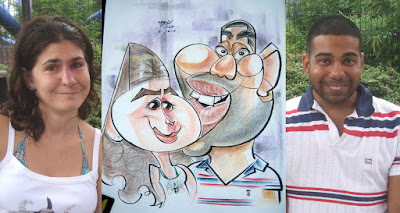 11. I liked the circle connecty line 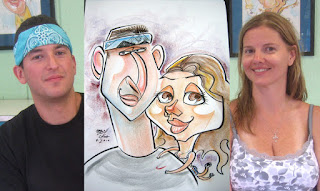 12. this one had more potential than what I did 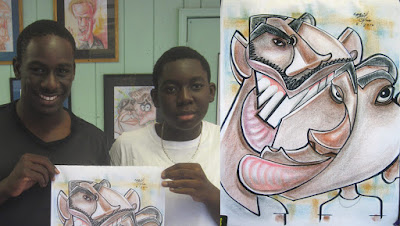 13. I think they said they were from South Africa, I do remember the left kid saying he was going to John Hopkins for school. I pretty well respected school I believey and I remember giving him kudos for that. I was pretty happy with this, one of my more favs from the season, I thinks. and they dug it as well. oh and sometimes I'll ask people what their fav color is for the background and I remember one of them saying tan, which is a less frequent answer I get, but liked it cause it was different. 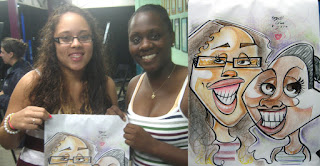 14. I think I missed a bit on the likeness on the girl on the right...but still works enough.
Cat in the background hustling some customers. "I'm a hustler baby...I just want you to know" heh. 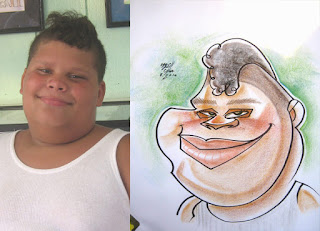 15. a real quick one that I thought turned out decent. prolly could have pushed it much more but my co-worker was drawing the other kid of the same family and didn't want mine to be too drastically different. or weird, heh. 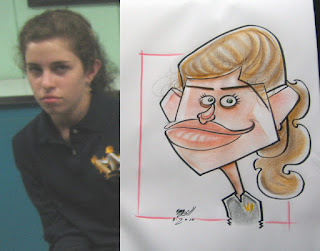 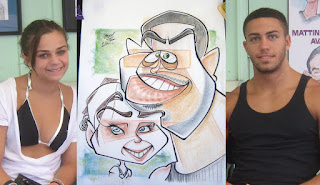 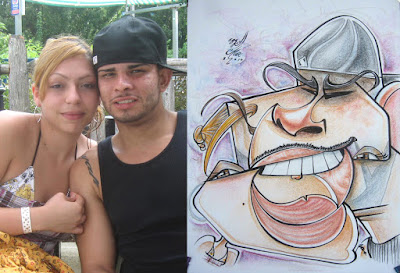 18.I just used the picture of this couple from a previous sale and redrew it crazier for fun- trying things. 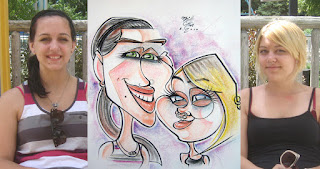 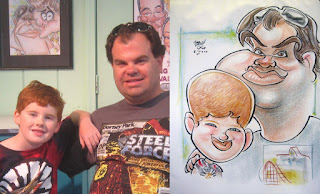 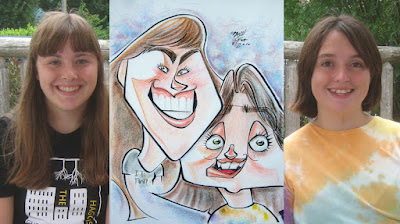 21. these were cool happy girls, and were really happy and excited about their sketch. yay! also, I like coloring tye dye tshirts in sketches. 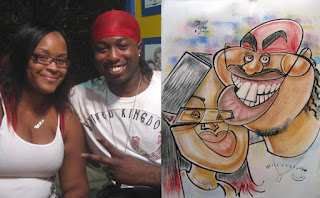 22. yeah, those lines on his mouth are odd and distracting, eh, trying things. 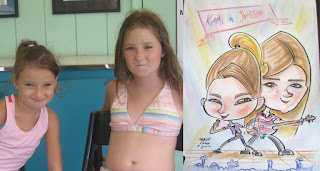 24. these people apparently get caricatures all the time at theme parks. so I thought I had to spend a lil more effort and time on it. y'know, cause I can't be the one who's caricature is the worst they've gotten, y'know? :) well, who knows, it might be for them...but they seemed to like it enough when they saw it. 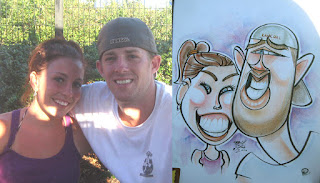 25. a very nice couple- this sketch drew a crowd around me. I liked how the guy came out. I was really trying to push more for the feeling of his facial features and trying less to draw what I "saw" which is an easy trap to fall in at times. I made his Kangol hat into a Kangoal hat with the O into a soccerball. I'm easily amused, k? :) 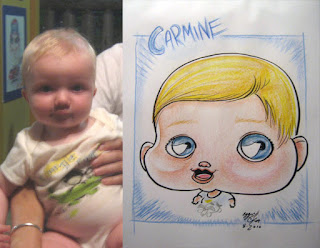 27. lines are kinda blah, but came out kinda cute overall. 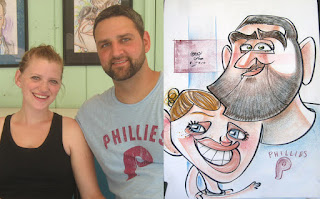 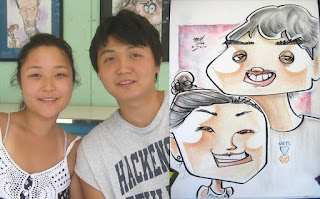 still have some more from last season.
Posted by chris chUa! at Thursday, March 31, 2011 3 comments 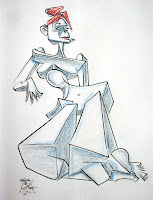 1. 15-20 min. I liked this one, I started with the marker on the legs then worked my way up and it kinda just worked out 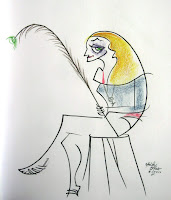 5. I was happy with this one

11. 20 min. something a lil different, this is in the vein of the type of liney work I used to do. was kinda fun to revisit.

17. 10 min. bah. kinda plain, one of the few sketches that I actually penciled out 1st and it usually turns out more eh.

18. 10 min. I really should do more of these aggressive lines on my caricature work. that's what I feel lacks a lot of the new york times. 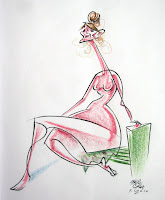 21. ~15 min. this one was kinda fun, just jumped from line to line winging it without any real gameplan other than trying to play off of the recliner and silhouette...ok, I guess that is sort of a gameplan, heh...but it was vague.
these were drawing at Lafayette College's free life drawing sessions every thursday from 7-10 in Bethlehem PA & at a Drink and Draw in Bethlehem.