Category: Art parties/Cripple con, CARICATURES: of friends and co-workers
I'm still playing some cathupp on pics that I haven't gotten a chance to post. Here's the art I did at Cripple con 3 in San Antonio, TX this past January. It's the best yearly art/party you can possibly attend. I'll be there every year. The coolest and most talented people attend every year. You should too! Cripple con 4life will be Jan 13-16 2011! mark your calenders! 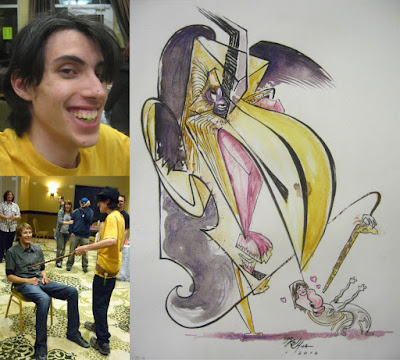 1. Nick Rodgers and Brian Oakes. this was awesome and hilarious. and too hard to explain, you had to have been there. 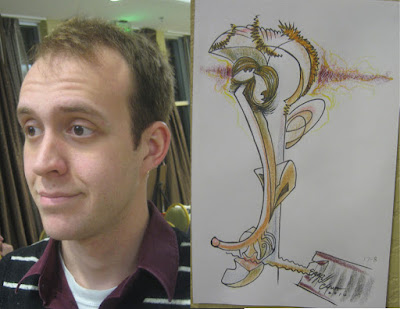 2. Brent Noll. cool dude and artist from texas. He really wanted a caricature from me, wish I could have done a better one. likeness could have been better. I always feel bad when people that specifically want a sketch from me and I do an eh one for them. 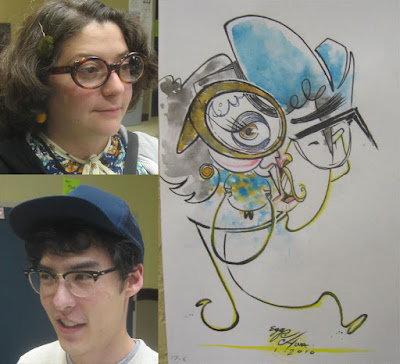 3. Tawnya Hudnell & David Walz. I was pretty happy with this one. I liked their nose meshing area. afterwards, I realized that Lindsey (who I drew below) had done a sorta similar pose, not of the half and half face thing I did but of just the pose of David carrying a tiny Tawnya when she drew them last year. I wasn't thinking about that when I drew it, although I did really liked the one Lindsey did. maybe it was subconchris. 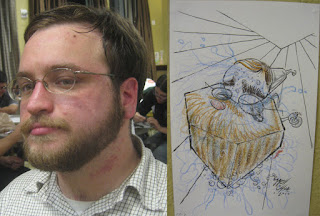 4. oops, I forgot to post this one. this is Ryan Haecker. He's made up of a shower head and soap. 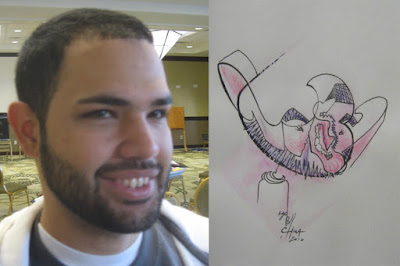 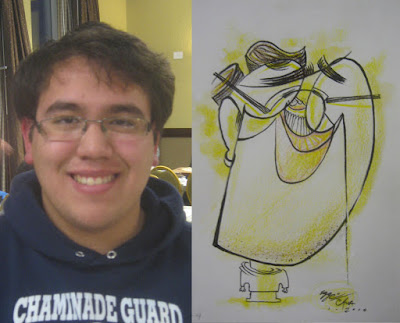 6. Chris Ochoa. I liked the likeness on it. like. like and ikes. I like the band, "the Like" seriously. check them out, they just released a new album. catchy fun throwback pop girl band. lead singer's got a sexy raspy voice. mrrow. also they have songs with clapping! I love songs with clapping! I'm listening to them this very second and dancing in my chair. woo! their other album is pretty good too "are you thinking what I'm thinking" 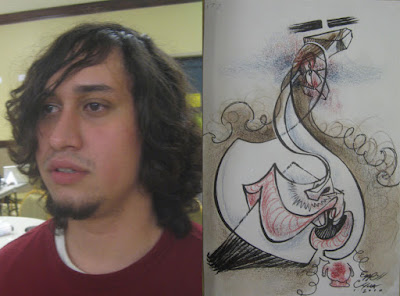 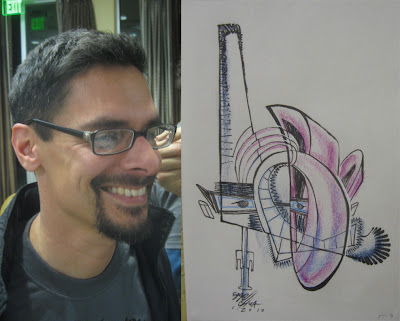 8. Mez- for some reason I couldn't figure out things and nothing was coming out right. I spent a lot of time reworking it until I got feed up and just went with this. I'll have to try again. 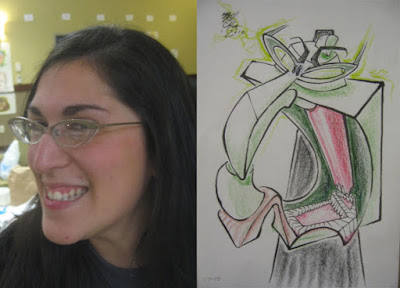 9. Lindsey Villarreal- I kinda like this one, kinda wished I had more time to do a more polished finish and tweak a few things. y'know, I take it back, I like the ideas, but the likeness missed, chin area is wrong, made nose too big.

10. Rob Dumo- was in the art fight finals with Alex Clare this year and they both rocked it with some amazing artwork drawn with crazy speed. I kinda like this one, nose could have been a little more pronounced, but I like the shapes of it.
-------------------------------------
I have a bunch more artwork coming soon, just been working crazy long hours and all the time at the theme park. It's really pretty draining...but we have lots of awesome employees that makes it fun to come to work even when I'm physically and mentally drained all the time, heh. I also found some cool local figure drawing places and have been doing more of that with my awesomely talented friends which is a blast. I have like 30 pieces to post, just gotta find the time to do it... and find more time to go to them. Also, I HAVE been doing more caricatures in the park and taking pictures. Business has been a little slow, and I'm trying some new things out which makes for some iffy drawings as I work out the kinks. but there's some cool ones that I'll get around to posting.

------------------
oh and one of my caricatures was in an article on the website The Huffington post called "Street Portraits Gone Wrong: the Funniest Caricature Drawings Ever" ha ha, it's not one of my best ones but oh well. heh.