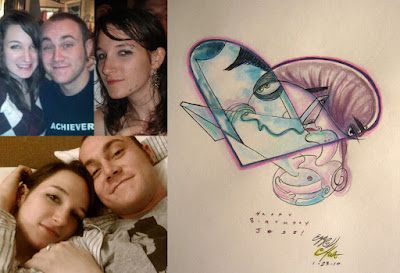 These are my good friends Alex and Jess. aww, look how cute they are in the photos. I drew this for Jess' birthday a few months ago. Jess has been wanting me to draw them for a while and I have a habit of putting artwork off especially for friends, as I want to make it extra awesometastical for my friends...and so I never feel like I'm good enough so I keep sketching and practicing but I still never feel ready to put pencil to final paper so I just keep putting it off. So usually, it takes something that forces me to get it done like a special occasion ala Jess' birthday to force me to just put something down otherwise I'll never do it. I guess I'm better with deadlines...although I still wait to the last minute like this, heh. that's why working in a theme park is good for me, cause I HAVE to draw the person.
I think I prolly over complicated it by trying to make that overall heart shape, I tend to overthink when I have too much time (again, that's why my theme park caricatures are usually better) thus made their faces more forced. I'm going to do another one of them. oh and Jess is a music buff so I made her pony tail into a treble clef. also check out Alex's art blog, he just updated it with some AWESOME beer label art he got commissioned to do! 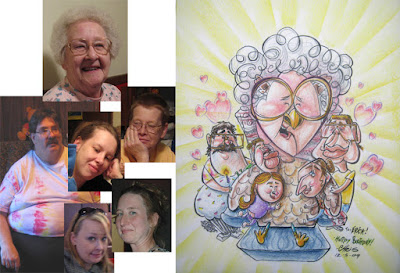 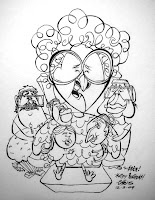 eh. didn't go as exaggerated as I wanted/hoped. another caricature for a birthday.

a birthday card for my good friend, Cat Hupp. It's been a while since I've drawn a birthday card, I used to do a lot of them like this for friends. I forgot how fun they were to do.

a left over caricature I forgot to post drawn at Sea World, Orlando when I visited there this past Christmas. I mostly like the connect line from him to her forehead. they had a good laugh and were good sports. I miss that park :(

still have some cripple con 3 artwork to post. I've been mad busy getting things ready for Dorney park which our opening weekend was this past weekend. I drew a bunch of lame-o fast and boring sketches at Dorney the other day. ugh. and of course that's when I sell a bunch of frames with them. I do have a few decent caricatures I drew while I was helping out Six Flags, NJ a couple weeks ago, will try to get to posting them sometime soon as whale as some figure drawing I did at a local drink n draw at the Hard Bean in Bethlehem. which I'll prolly be going on a monthly basis. every 2nd thursday of each month. next one is next week!
I'm tweaking how I'm approaching caricatures a bit, taking some adjustment but hopefully I'll get it worked out soon. Cute-ica-CHUAs, here we come! heh. we'll see...

----------------
misc random ramble thought time!
I'm not a dog person. nor am I a cat person. not that I don't like animals I just don't like the concept of having an animal as a pet running around free in living quarters. I do have an exception, I'm fine with whales living in the house. they're especially nice during the winter as their blubber is good to keep the heat in. it's kind of annoying to have to slice their skin open and live inside them though. but yeah, it's nice and warm inside. also, some guy with a wooden leg and spear keeps trying to sell me life insurance or encyclopedias or something. won't take a hint that I'm not interested.
Posted by chris chUa! at Wednesday, May 05, 2010 8 comments